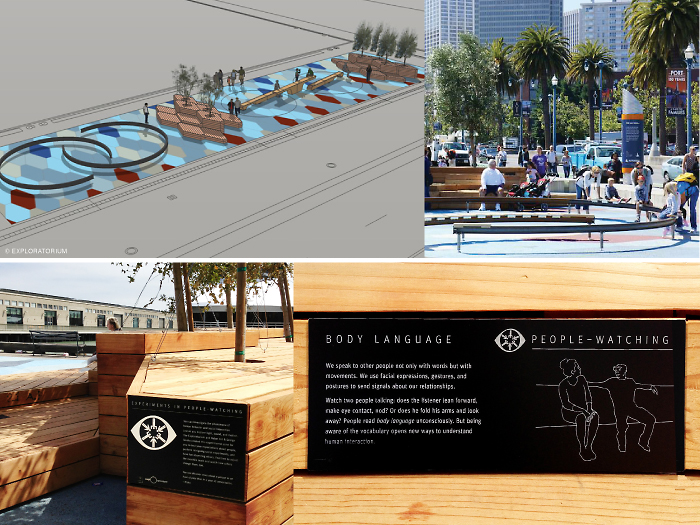 My wife and I flew into San Francisco for a couple of days before driving out to Yosemite National Park for our summer vacation. On our first morning in SF we happened across Ferry Station Marketplace. The plethora of sights, sounds and tasty delights overwhelmed our senses. Some time later we found ourselves wanting to get away from the hustle.

As we began trekking down the Embarcadaro we came upon a cluster of well-designed wood benches and stopped to relax a minute. As we talked and looked around, we realized that this was not an ordinary space. We had dropped ourselves smack dab into the middle of a fully designed experience.

Created by Rebar Studio, in conjunction with the Exploratorium, the pop-up plaza was created to explore the dynamics of social behavior. The “parklet,” a public access space titled “Experiments in People Watching.” is structured around reconfigurable and interactive seating. The centerpieces of the space are two different constructions of modular lounging, tied together by a bold, graphic pattern painted on the asphalt. One seating configuration consists of two intersecting “social circles” of benches on tracks, which can be slid around for bay-viewing, people-watching, or interaction. The other construction is a “social spirograph,” which consists of a long main axis from which users can pull out individual arms of benches for solo or group seating. Each arm moves independently from the others, leaving chalk tracings on the ground that record the way people have chosen to organize their social interactions—including their proximity from others.

Shawn Lani, Exploratorium studio lead, observes, “People traveling to a new city are particularly primed to notice cultural and social mores of the resident population, in particular, how people are different from the folks back home. Examining the local character is a natural and gratifying part of being a tourist. Of course, people-watching is also part of our everyday life—the way, as social beings, we navigate relationships with others.”

Watching the multitudes of folks interacting with each other within the space was theatrical. We sat for quite awhile, enjoying the parade of passersby and wondered about those who live, work, and visit here. There were even small placards placed around the park to help guide you in the thinking. This particular moment of our vacation made me realize that the simple things in life can be just as entertaining and inspiring—and not to mention free—as anything else. I was energized by the thoughtful use of such a prominent area and wondered what the possibilities could be for other such public spaces in our own community back home.