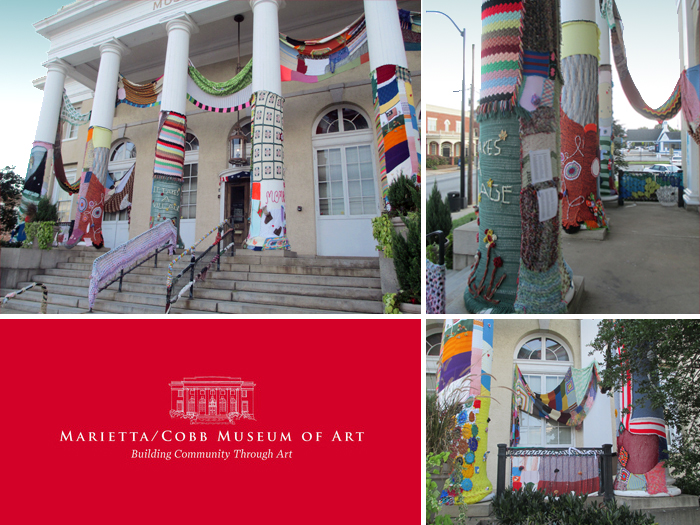 If you’ve visited a major city or have happened by a knit shop in your community, you may have noticed a tree or pole covered in knit or crocheted yarn. That would be an example of the street art movement called yarn bombing or yarn storming that has been growing since the early aughts. Created by individuals or groups, it’s a way of reclaiming and personalizing public spaces.

As an avid knitter for many years, I was excited to learn that Katie Bush, the Education Director of the Marietta/Cobb Museum of Art was organizing a large installation in Marietta. The goal of the project was to bring art to the local community in a new way and introduce the museum to those that may not have realized it was there. I had been looking for a way to meet and collaborate with other local knitters and this offered the perfect opportunity. I signed up to help teach basic knitting at a series of workshops and met a great group of people from beginners to lifelong knitters. Everyone enjoyed the workshops so much that additional dates were added.

After months of evening workshops and panel sewing sessions, the installation was revealed in July. The museum received enough pieces to complete the installation outside and add installations inside. The exhibit extended the museum’s reach by encouraging people to participate in art-making while expanding the definition of public art and creating moments of unexpected delight. It’s a fun and quirky example of the energy and creativity that thrives in our community.