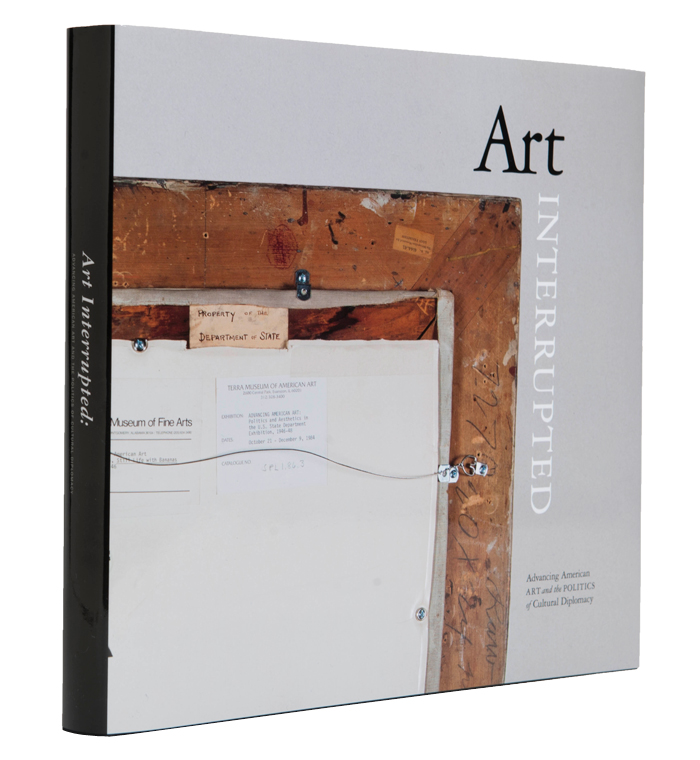 Design and art are just a few of the things we’re passionate about at Grant Design Collaborative, so the chance to designan exhibition catalogue about art for the Georgia Museum of Art was a special opportunity.

Art Interrupted: Advancing American Art and the Politics of Cultural Diplomacy chronicles the rise and fall of Advancing American Art, an exhibition and lofty diplomatic initiative of the U.S. State Department in 1946 aimed at exemplifying the free expression of American artists in the modernist and contemporary styles of the time while attempting to mend fences in the aftermath World War II. An exhaustive tour was scheduled through Latin America, Eastern Europe and Asia, but the effort was scuttled shortly after it began. The program was quickly engulfed in controversy over the paintings and artists selected and the State Department chose to recall the exhibitions and sell off the assets as war surplus to avoid losing funding for cultural programs abroad just two years later.

Art Interrupted is noteworthy for being the first exhibition to reunite all but 10 paintings from the original Advancing American Art exhibition.

We enjoyed the challenge of giving form to this unusually epic chapter in the history of American art. More than just admiring the great art included in the show, we found ourselves totally immersed in the story which played out like a great tragedy with heroes and villains and the prizes caught in between. For this reason we believed that the story required a unique approach to its telling, ultimately setting the story apart from the catalog of works by creating a book within the book.

The cover also offered the opportunity to make an impact. Rather than just feature one of the paintings prominently on the cover, we opted for a more conceptual approach. By featuring the back of one of the paintings and thus denying access to the art—the true casualties of the failed initiative—we were paying tribute to the program’s tumultuous history.

Fast forward to 2014, on the eve of Art Interrupted’s arrival at its final destination in Athens. It was announced that our catalogue was granted the 29th annual LoPresti award for Exhibition Catalog design. This award was established in 1985 to recognize excellence in southeastern art publications. Additionally, the winning publications are housed at the Duke University East Campus Library in Durham, North Carolina.

We are very proud to be a part of this legacy. Thanks, as always, to our partners at the Georgia Museum of Art for their trust and thoughtful collaboration on this important project. It was a true team effort.